Award-winning journalist, producer and director Hannah Storm is a pioneer in the field of sports broadcasting for women, a published author, an advocate for children suffering from debilitating vascular birthmarks, and most importantly, a mother of three.

In 2018, Storm made sports broadcasting history once more when she, along with veteran sports broadcaster, Andrea Kremer, because the first female duo to provide commentary and analysis for Amazon’s live streaming coverage of 11 Thursday Night Football games on Prime Video.

Storm joined ESPN in 2008, where she is co-host of the weekday edition of SportsCenter and host of SportsCenter Sunday Morning during the NFL season. Storm is also host and executive producer of ESPN’s primetime interview specials, In Focus with Hannah Storm and Face to Face with Hannah Storm, where she sits down with various newsmakers in sports. The Face to Face brand has since been extended to a weekly series during the NFL season on ESPN. 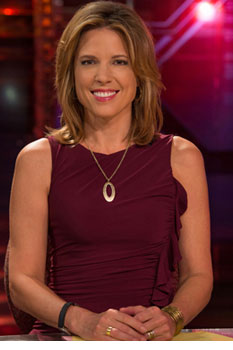 In addition to her current role at ESPN, Storm has co-hosted the network’s The Sports Reporters as well as contributed reports to E:60 and Outside the Lines. She is also an original member of the Board of Advisors for espnW. In 2012, Storm co-anchored ABC’s “Walk the Wire,” which depicts the story of daredevil Nik Wallenda’s unprecedented live Niagara Falls tightrope walk, and has recently served as a correspondent for ABC’s 20/20, where she’s done pieces with Shark Tank stars Robert Herjavec and Kevin O’Leary.

In 2008, Storm pursued an additional passion of hers outside of the broadcasting world: film production. She founded Brainstormin’ Productions, through which she has produced, executive produced and directed award-winning documentary films and branded content. Film projects include Unmatched, for ESPN’s Peabody Award-winning “30 for 30” film series; Shaq & Dale, for the SEC Network/ESPN/ABC; Love & Payne, the inaugural espnW “Nine for IX” series short film; Swoopes, for ESPN’s award-winning “Nine for IX” series; and Moving the Goal, for espnW’s “HERoics” series, part of the 2011 FIFA Women’s World Cup coverage. Branded content for ESPN, espnW, and ESPN.com includes Journeys & Victories (Proctor and Gamble); Beyond Reason (Oakley); Stories of Will (Under Armour); The Drive series (Ford); and The Journey series (Speedstick). Storm has won several awards for her work in conjunction with Brainstormin’ Productions, including the 2013 Gracie Award® for Outstanding Web Site – Information/Entertainment, the 2012 Gracie Award® for Outstanding Individual Achievement – Producer – Entertainment, and the 2011 Gracie Award® for Outstanding Producer – News/Non-fiction for Unmatched.

Storm is an award-winning author, having penned two books: “Notre Dame Inspirations” (Doubleday, 2006), and “Go Girl!: Raising Healthy, Confident and Successful Daughters through Sports” (Sourcebooks, 2002; 2011 re-release). For her literary work, Storm was honored by the Literacy Advance of Houston as its “Champion of Literacy.” Storm has also contributed to various publications, including Cosmopolitan, The Hollywood Reporter, Nick Jr., Family Circle, Child, and Notre Dame Magazine.

In addition to her regular roles in television, Storm has appeared in several films and television shows, including Like Mike, Valentine’s Day, Creed, “Arli$$,” “Scrubs,” and “As the World Turns.” She also lent her voice to a Hoover Vacuum ad campaign.

Storm has received numerous awards for her work in media and other pursuits, including the 2000 Gracie Award® for Pioneering work as a female in the world of sports broadcasting; the 2005 Gracie Award® for Outstanding Anchor, News; the University of Notre Dame’s Distinguished Alumni Award; the March of Dimes Sports Legend Award, the YWCA Brava Award; and the Traditional Home Classic Woman Award. Storm was also named to The Paley Center for Media’s “She Made It, Women Creating Television and Radio” Hall-of-Fame in 2007 as well as to Family Circle’s “Most Influential Moms” list.

Storm graduated the University of Notre Dame in 1983, where she received degrees in communications and political science. She currently resides in Connecticut with her husband, Dan Hicks, and their three daughters.

The Hannah Storm Foundation is an advocate for children’s issues. Our goal is to inspire individual potential and to promote an active and fulfilling life.

We provide medical support for children and families suffering from Vascular Birthmarks and their related medical conditions. We sponsor surgeries for children around the world, who otherwise could not afford treatment.
We educate and raise awareness about Vascular Birthmarks. We assist patients seeking insurance coverage and educate families about the latest news in treatment options and diagnosis, sponsoring patient Advocacy Days. In addition, we raise awareness in the general public about Vascular Birthmarks and their related conditions.

We also sponsor the Hannah Storm Journalism Internship at the University of Notre Dame, giving students a chance to have a portfolio of writing experience upon their graduation.

At Brainstormin’ Productions our approach to working with clients is building one-on-one relationships to help them feel comfortable bringing to life every aspect of the stories they want to share.